Its a pretty special feeling to park your very own Ferrari in the shed, some of the kids were present to honor the occasion. 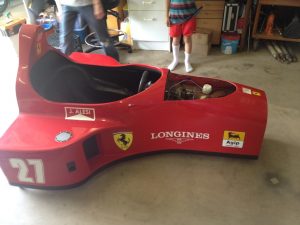 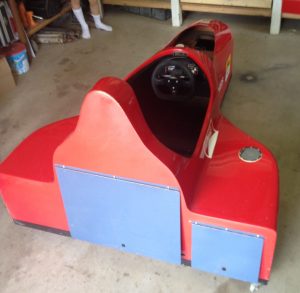 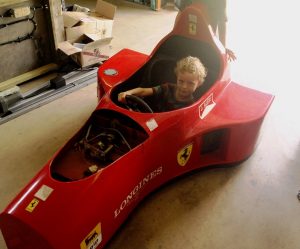 The teenage boy smiled but really doesn’t get it.
The teenage girl would eventually ask why I’d brought a space shuttle home.
The nine year-old was so excited he was speechless (which is quite rare!).
The six year-old thought it was pretty cool, he had the first drive. He would eventually ask if I was going to make it like the real ones at the supermarket that move and make sounds when you put money in them.

It’s in pretty good nick for a 25ish year-old piece of kit and its quite well built. All fiberglass (mostly) and finished in Ferrari red duco with Jean Alesi livery (sort-of), circa 1992. There’s a few chips and knocks, nothing that requires repair however. I might get some matching touch-up paint when I’m finished working on it, not yet tho.
The poor old suede wheel was really showing its age and the original steering mechanism was still in tact, it’d been wired up to a Play Station 1 controller. I considered using the existing mechanism, but it was a bit sloppy and didn’t really offer what I was looking for, such as 900­° rotation and force-feedback.